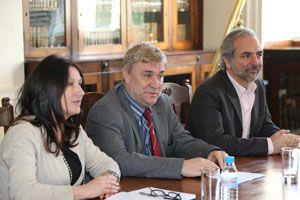 The Ministry of Culture is pleased to announce that Dr Andrew Canessa (University of Essex) and Dr Jennifer Ballantine Perera (Gibraltar Garrison Library) are recipients of a major award from the UK Economic and Social Research Council for their project Bordering on Britishness: An Oral History of Gibraltar in the 20th Century. The project will officially start in September 2013 and finish in March 2017.

Bordering on Britishness will focus particularly on experiences of the border with Spain and at its root is the simple question: what does it mean to be Gibraltarian? To this end it will hear the voices of a wide range of Gibraltarians from all sections of the community: including people from a range of religious groups; those born in Gibraltar and elsewhere; younger people as well as older people; and also a small number of people in La Linea with Gibraltar connections. In all, the project will have at least 400 participants with approximately 1600 hours of interview.

A basic part of the research methodology of the project is that people be comfortable in speaking any language they choose so it was considered essential that the researchers be fluent in English and Spanish. Bilingual interviewing and oral history interviewing are very special skills. A key element of the project is the special training of 12 locally recruited researchers who will undergo training with Dr Andrew Canessa (an experienced anthropologist) and Dr Melissa Moyer (world expert on bilingual interviewing) before the project begins. Training and support will continue throughout the running of the project.

This is also a major opportunity to record the language of Gibraltarians as it is actually spoken and the audio material will be available on an open access website for current and future generations of Gibraltar. The project will fund the setting up of the website and the archiving of the data which will be handed over to the Gibraltar Government on completion of the project and will be kept at the Garrison Library. One key element to the project’s successful bid was the fact that the data would be open to Gibraltarians and other researchers for years to come. It is envisaged, for example, that schools in Gibraltar use some of the material for their own projects that could then, in turn, be uploaded onto the website.

The project will be presented to community and religious groups at every stage. There will be a film by Nina Danino, two conferences (funded by the Gibraltar Government), two books and several scholarly articles. The research will also be disseminated in national and international conferences in the UK, Spain, other European countries and the US.

This is a large project and nothing has ever been attempted on this scale before. We are very pleased to have this substantial grant from the UK Government for this major research project, which will provide a resource for generations to come.