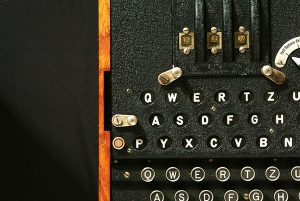 Enjoy an epic tale of man against machine – including a full demonstration with the original WWII Enigma Machine – as Dr. James Grime illuminates the brilliant mathematical insights and innovative thinking of Alan Turing. Known as one of the 20th Century’s greatest mathematicians, Turing was a pioneer of computer science who is best remembered for his role in breaking the Enigma, the purportedly unbreakable code used by the German military. Dr. Grime, from Cambridge University and the Millennium Mathematics Project, weaves the history of Alan Turing and the Enigma, sharing the triumph of mathematical ingenuity. As well as this evening presentation, Dr Grimes will be making presentations to year 8 students.

Dr. James Grime is a mathematician and public speaker working for the Millennium Mathematics Project at the University of Cambridge. He can be mostly found touring the UK, and the world, giving talks about the history and mathematics of codes and code breaking. And when not doing that you find him making videos about mathematics for YouTube.

The evening event will take place at The Garrison Library, Gibraltar, on the 20th January 2014 at 7:30pm and has been sponsored and organised by the Kusuma Trust Gibraltar.